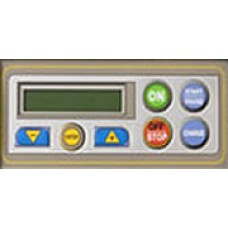 Replace keypad if a button does not work or if you can no longer see the display due to cloudiness. Keypad failures are rare during the first 5 years of use, however, living outside under the sun takes its toll on electronics! LawnBott Keypads are the membrane type with raised buttons. Over time some buttons may stop working. This may occur after about 5-8 years of use, typically.

There are a few interesting keypad failure modes that cause your robot to behave strangely:

By now, you have gotten the idea! You might observe another strange behavior and determine the cause could be the keypad. It's always a good place to start because we've seen keypads fail before batteries do in some of our long-time customers' robots. Typically batteries last 8-10 years so if your robot is not that old, look into the keypad first.

Another issue is the display may become cloudy due to the plastic cover that is part of the keypad. It might become hard to read the display. Replacing the keypad solves this issue as well. The replacement keypad and display cover come in one integrated module.

Performing the keypad repair is easy. Simply disconnect the battery for safety. Then remove the old keypad by disconnecting it inside the robot. Then lift the keypad off with a tool. Clean the surface of all leftover adhesive with a product like "Goo-Gone®", then peel and stick the new one. Reconnect the cable, reassemble the robot and you are up and running!

*Note, the replacement keypad may look different than the original and have different names for the commands, but it works the same.


Your Review: Note: HTML is not translated!

Enter the code in the box below: